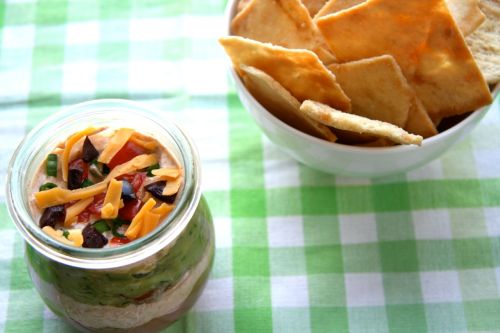 If you asked CH what appetizer must be at a party/get-together he would say “Buffalo Chicken Dip” and “7 Layer Dip”, without even hesitating.  He loves both of them and will basically stand beside the table until he’s gotten his fix (which is usually the whole thing).

We had a Friday night appetizer night at home a couple weeks ago, just the two of us, and this was one of the first things he asked for.  It’s such an easy dish to make, it’s fairly healthy and in my opinion it looks so pretty (until the end that is!). I’ve lightened up this recipe, as I don’t use cream cheese or a lot of cheddar cheese, but there are so many variations that you can switch it up if you like.

Of course, you can also buy this dip pre-made at the store (Costco makes a great one!) but home-made is always better in my opinion. I took it a step further and made my guacamole from scratch and my taco seasoning and I cannot tell you how much better it tasted – CH claimed it the best he’s ever had (yes, I know…that acclamation happens often around here, what can I say, I’m lucky!).  My next step is making the refried beans from scratch, but I have to be a little more organized for that.

In any event, with the big football weekends coming up, this would be a great appetizer.  As my photos showed, I styled it in individual cups (mine was a little small!), which I think is such a stellar idea for a party – you can double dip all you want, without worrying.  Plus, I just think it looks so stylish.  I cannot take credit for this idea, for I saw it on Pinterest – which has many upon many good ideas.

PS – I got excited styling my container to photograph and totally switched-up the layers – hence two sour cream layers, whoops!

Serving Size: 7×5 inch pan or so, enough for 4-6 people as an appetizer
Prep Time: 20 minutes (if you make things from scratch)
Cook Time: None!

Select your serving dish – I used a 7×5 Emile Henry personal lasagna dish, which was perfect for this.  Since this recipe isn’t strict, use whatever you have on hand and just adjust accordingly, you may have a little leftover that doesn’t fit, but oh well, it’s perfect for a snack tomorrow!

On the bottom of the pan, spread an even layer of the refried beans.  Next, layer the guacamole.

Mix together the sour cream and the taco seasoning in a small bowl, and then evenly layer it on-top of the guacamole.  Top the sour cream layer with the grated cheese, olives, tomato and green onions.

I try to make this ahead and let it chill in the fridge, covered, for at least a couple hours.

Serve with taco chips or pita chips (our favourite!).

One response to “The Perfect Snack: 7 Layer Dip”